When it comes to food in NY, you can basically get anything you want, mostly thanks to the vast diversity in ethnicity of its citizens. Italian, Chinese, American, Mexican, Indian, French, Belgian,.. you name it, New York has it. But it wouldn’t be very American of us (or Belgian for that matter) if we didn’t do it right and go straight up for the good old super sized fatty foods. Oh yes. I will spare you the details of the amount of calorie intake I had during that week, but since I still lost 2 kgs from all the walking I don’t feel as bad about it.

If there’s one thing I can truly recommend it’s The Brooklyn Bagel & Coffee Company. You can get bagels pretty much anywhere, but I haven’t had a bagel like this anywhere else. They’re located in Chelsea and Queens and have a big variety of freshly baked bagels and spreads to choose from. I went for the sesame bagel with smoked salmon and cream cheese. So darn good it makes my mouth water, even now. Apart from bagels, they also offer coffee, pastries, soups, fruit salads, paninis… about anything you’d want from a good breakfast. The service is as fast as lightning too. I’m a fan. 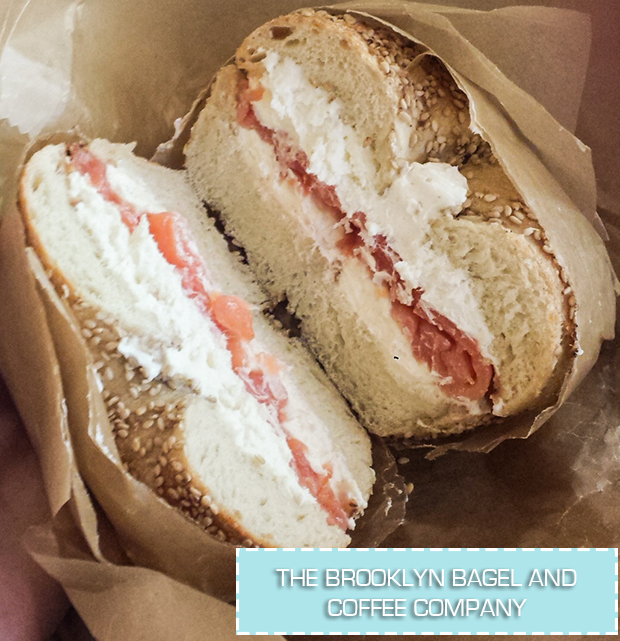 Looks like the New Yorkers are really digging them Belgian waffles! We spotted this cute little stand called “Wafels & Dinges” which offers Belgian waffles with just about any topping you want. Most Americans pronounce it as ‘Waffels & Dingees’, which we found quite funny. The correct flemish pronunciation is actually “Waah-fels en Ding (like ‘thing’ but with a d) us” which means wafels and (other) things. You can find their trucks all over the city, but the location at Herald Square quite nice to sit (right next to Macy’s). 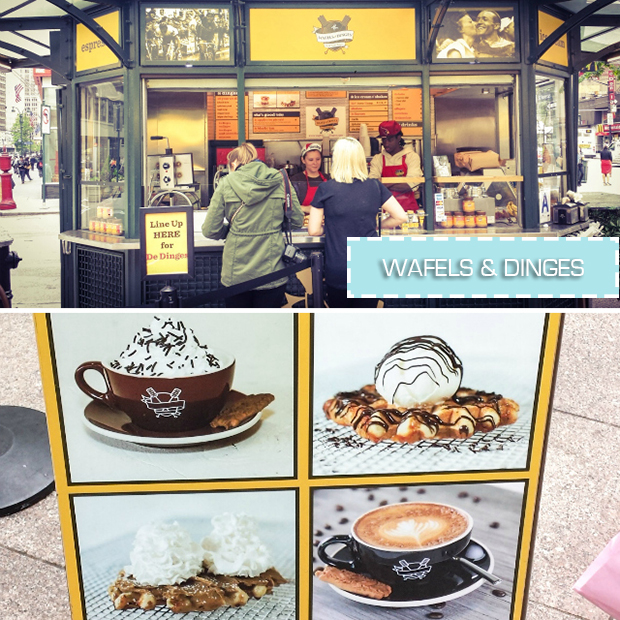 On the morning of our last day in New York, we went to eat American pancakes with maple syrup at the Tick Tock Diner, which was just around the corner from our hotel. Steph and I already tried some American pancakes at Burger King, but those made me feel as if I was chewing on some sponges. Ew. Luckily these tasted a lot better, but they’re still not as good as the ones I make at home (recipe here). 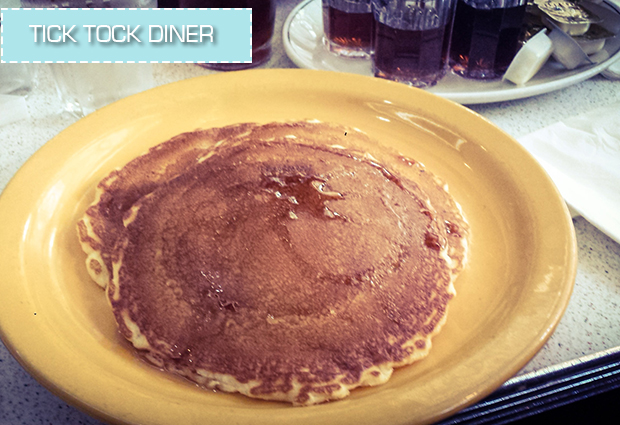 During our stay in New York, I’ve seen more of Starbucks than I hoped to see since my companions are rather addicted and there’s a Starbucks on every corner of the street. I don’t find this anything special, it’s just about the same everywhere. I’m even starting to think misspelling names is part of their company policy. ‘Stephimi‘, for reals? 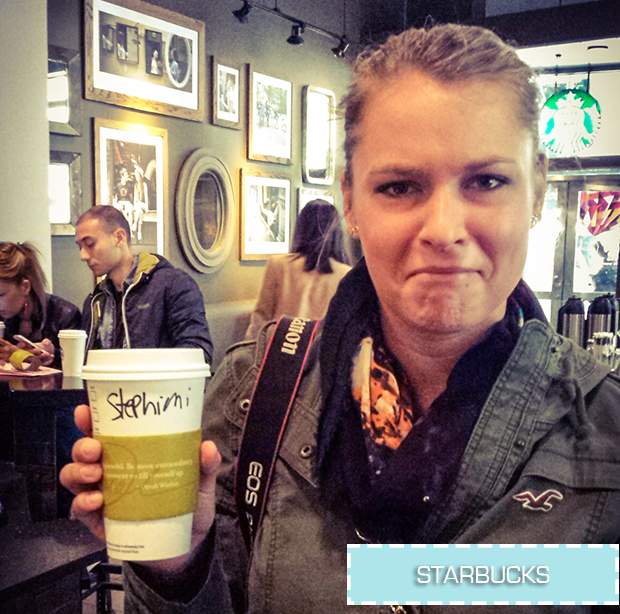 I don’t think there was one day in our entire trip where we didn’t have burgers at one point. Schnippers, Bill’s Bar & Burger, Johnny Rockets, Hard Rock Café are all places we went to for their burgers, but I thought Bill’s Bar & Burger had the best burgers and a large selection of Belgian beers (cheers). Try to book your table beforehand (on ground level) because this place is packed. Johnny Rockets on the other hand had the best setting (old-school American dining style) and super-friendly service. 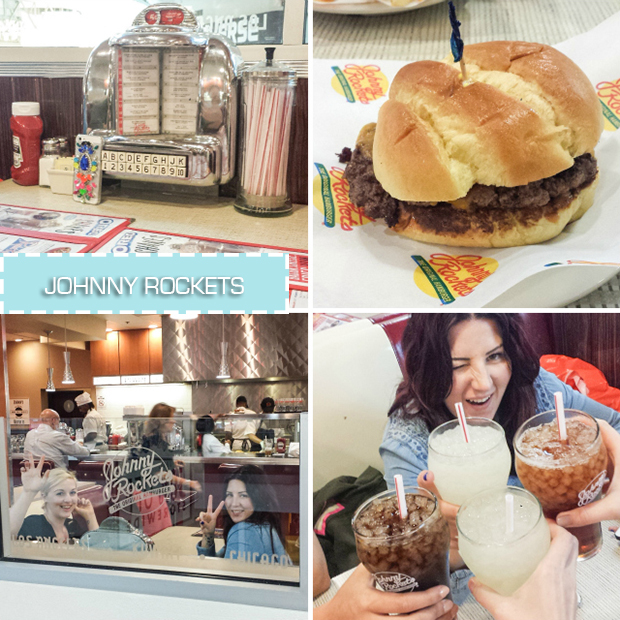 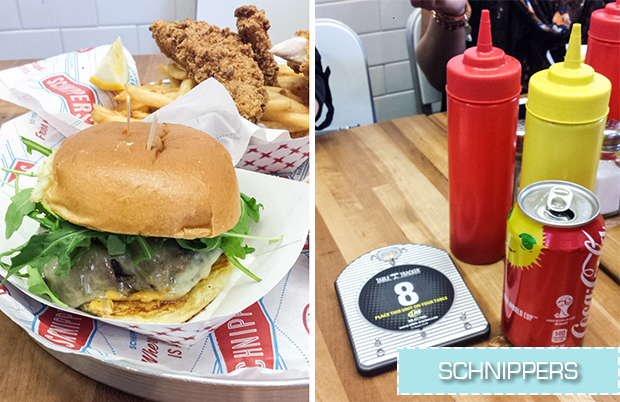 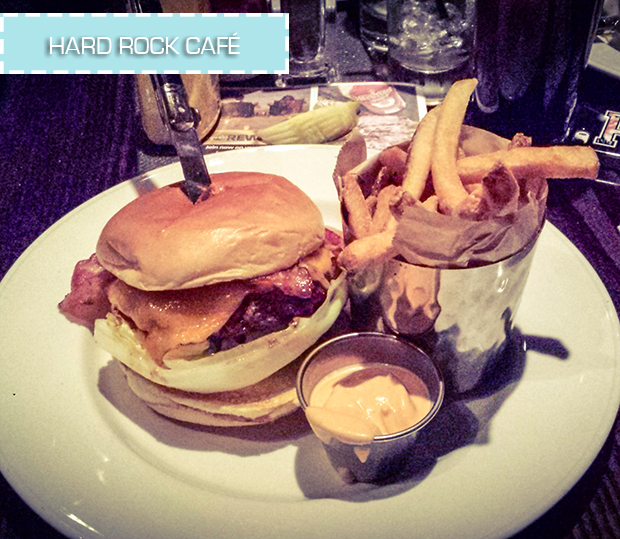 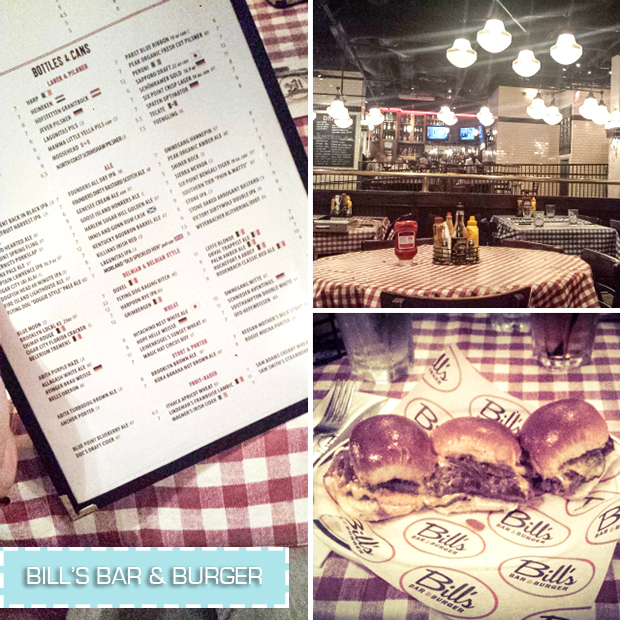 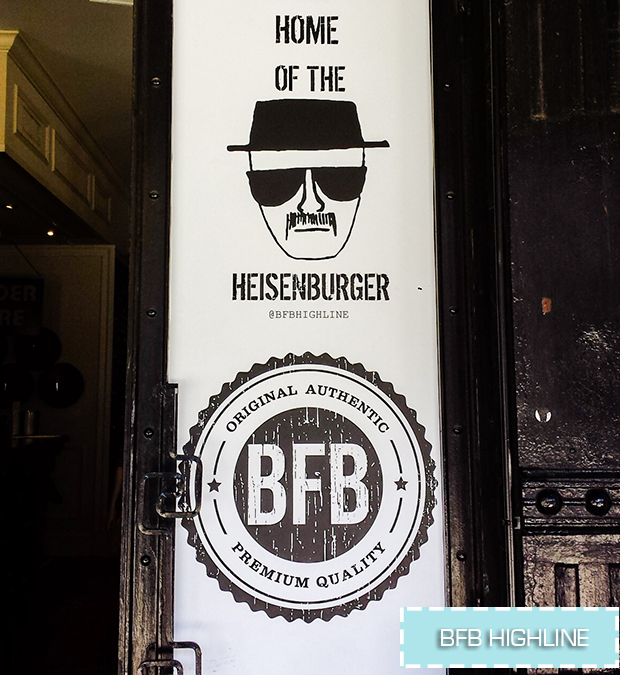 If there was one burger I really wanted to try, it had to be this Heisenburger (fist bump if you’re a Breaking Bad fan). We came across this place called BFB Highline during our last day when we visited the high line. I didn’t want to be caught dead near another burger and there wasn’t much time left, but this one is definitely going on my to do list for my next trip.

One of my favourite food places in NY has got to be Whole Foods. Shopping there is an attraction on its own. It’s your local supermarket but better. Everything is super fresh and the possibilities are endless. This is where we came for our burger-detox. Pick a carton box, fill it with whatever salad, cold and warm food you like, and you’re good to go. We liked the one located near The Empire Hotel, so that we could have a picknick in Central Park afterwards. 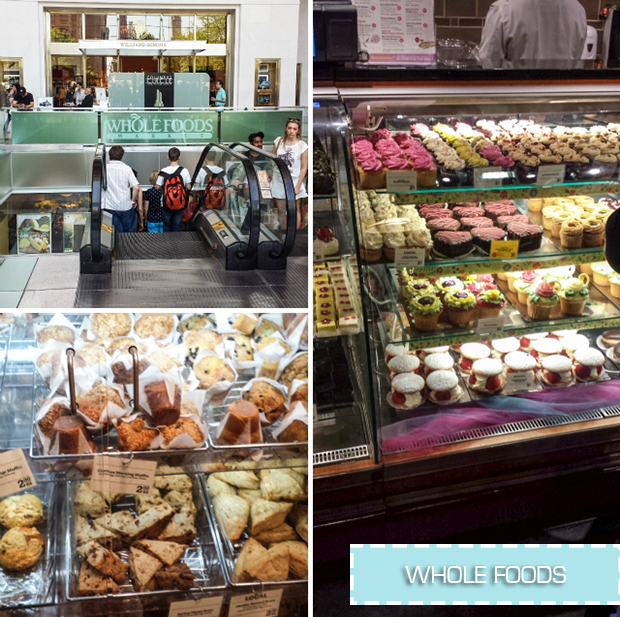 T.G.I.Friday’s is a diner/bar where you can enjoy a lovely lunch or dinner with your friends or have a drink while watching sports. I had some fried chicken which was surprisingly not that fatty at all. It tasted good, but the portion was way too big for me to handle. 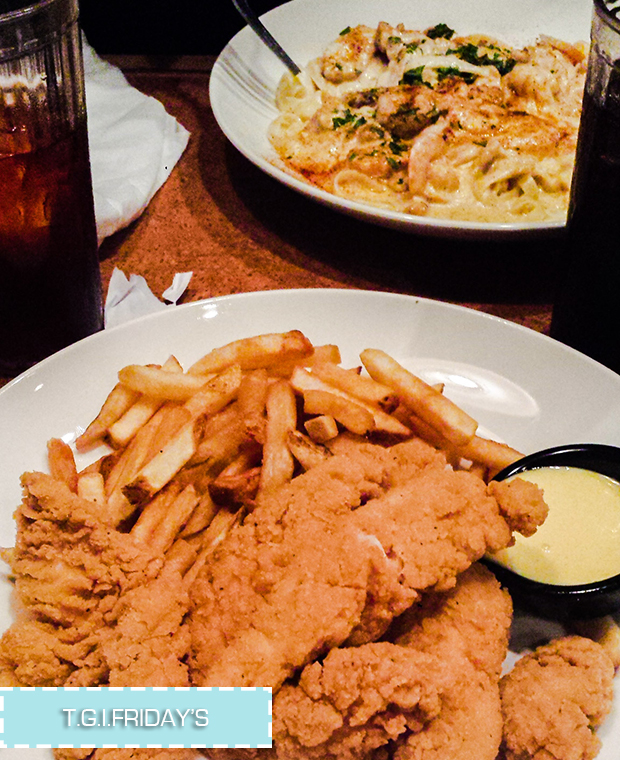 It’Sugar is the place to be to try some sugary stuff. Even if you’re not a fan of candy, this store is worth a peek since it has the funniest and weirdest candy ever. Grumpy cat merch, Harry Potter candy, giant gummy rats, camel balls (don’t ask), lollipops with bugs & scorpions,.. It’Sugar has it all. A great place to pick up some funny souvenirs for your friends and family at home, if you don’t eat them yourself that is. One of the bags of jelly beans I bought didn’t quite make it home. 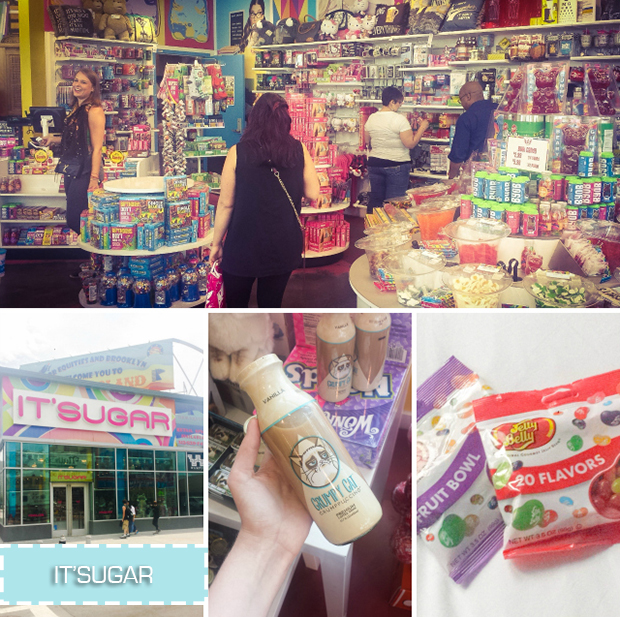 All of my memories of Japan suddenly came rushing back to me when I saw Cold Stone creamery, so it was inevitable I got some. The regular ones are so-so, the Signature Creations are the ones you should try! I went for the Chocolate Devotion, which was pure bliss. And again, even a small one was too much for me to handle. What is it with these ginormous portions in the US? Seriously! 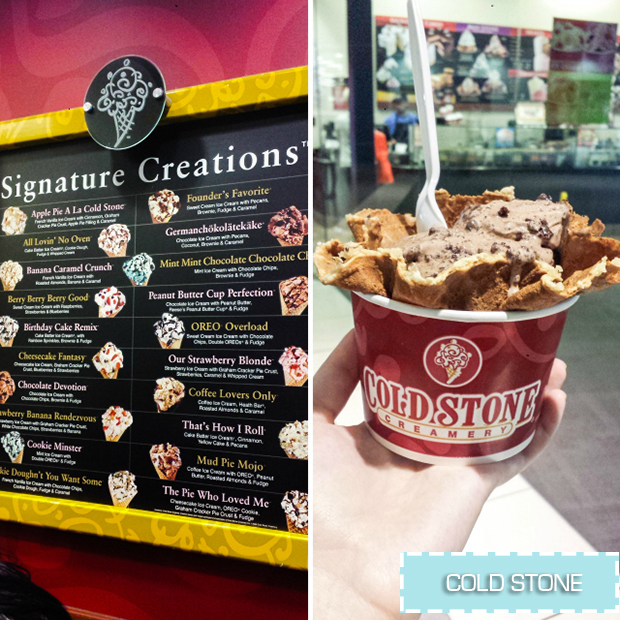 Magnolia Bakery Paying a visit to Magnolia Bakery is something every self-respecting Sex and the City fan should do. We did it twice and I went straight for the Chocolate cupcake. Twice. The girls were making fun of my ‘turd’ as they would call it, but it was the best damn turd I ever had. Super soft and creamy. Nom nom nom. The store itself was rather disappointing really. I prefer the cozy atmosphere of Julie’s House. 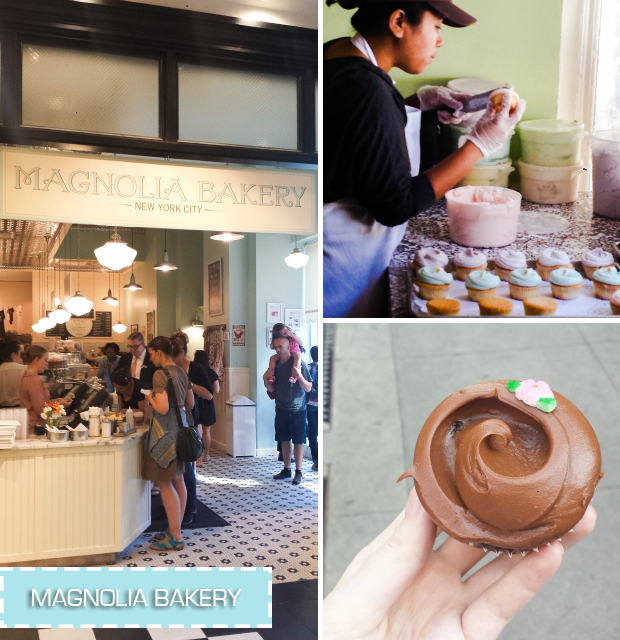 Other things to try…

American chocolate chip cookies, pretzels at one of the thousand booths of NYC, corn dogs at Nathan’s, watermelon slushies (or Coollata’s) at Dunkin Donuts.. there are so many American things I tried and there are many more I still need to discover. How come I forgot to try the famous Twinkies? How is that even possible?! 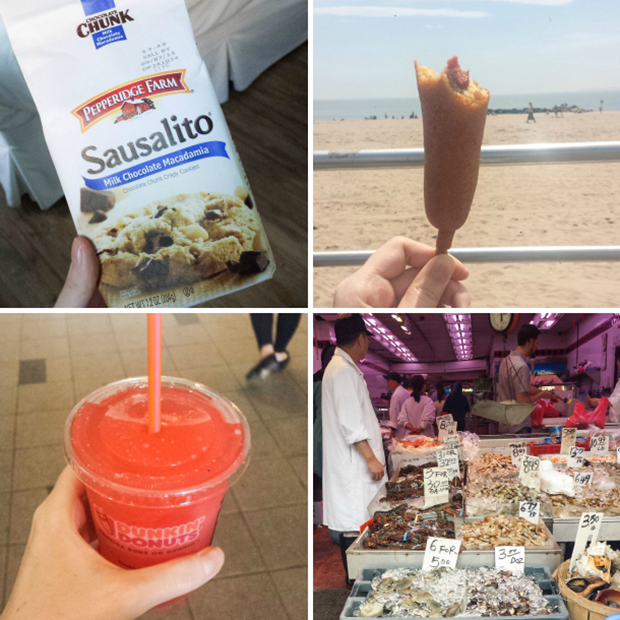 One last thing.. if you love Asian food, you’ve got to make a little trip to China town and enter one of the many restaurants. Lisha and I tried a freakishly delicious dessert there of which I don’t know the name (and I don’t have a picture either), but it was a fried ball of dough with sesame seeds and something in it I can’t really say. But anyway, the point is the city holds many hidden secrets, so it’ s up to you to go off of the usual tourist trail and find your own hotspots if you’re a regular NYC visitor. Since it was my first time in the US, all of these chains were all new to me. Some were absolute hits, and others misses. One things for sure:  this NYC quest isn’t over and I’ll be sure to find some more hidden gems during my next trip. Ones that are hopefully a little healthier.

And if you do happen to know some hotspots, please let me know in the comments below!

Pics taken with a Samsung Galaxy 4 and Sony QX10 lens.