2017  Was pretty much the year of “13 Reasons Why“. I couldn’t go online, read a newspaper or watch tv and not read or hear about the controversial Netflix series. It was everywhere. Even though I loved the show and am looking forward to Season 2 (coming in 2018), there’s one show that premiered this year that I love even more and think everyone should watch: Big Little Lies.

Big Little Lies is a mini-series by HBO and is based on the book by Liane Moriarty. The story takes place in the idyllic seaside town of Monterey, California. Everything seems smooth-sailing, until someone gets murdered at trivia night (but you don’t know who) and the gossiping begins. Soon the perfect picture starts to crack and masks start to fall off.

When I first read the show’s synopsis I thought it sounded a lot like the ‘Desperate Housewives‘ plot and couldn’t be bothered to watch it. Big mistake! Big Little Lies is nothing like the airy show you can watch while ironing your shirts. It covers some pretty heavy topics such as bullying, rape and domestic violence and does this in a very a-typical way thanks to the outstanding performances of its incredible cast. Reese Witherspoon, Nicole Kidman, Shailene Woodley, Laura Dern, Zoë Kravitz and Alexander Skårsgard are just a few names this show has to offer. 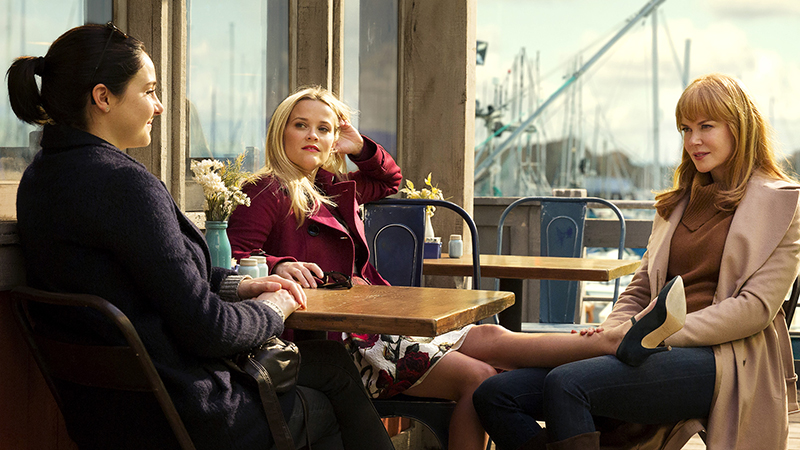 Special kudos goes out to Nicole and Alexander for the way they portrayed the toxic relationship between their characters Celeste and Perry. For once we see an abusive husband that looks attractive, is a loving father (hence the perfect picture) and is clearly struggling with himself, instead of the usual two-dimensional bad guy the wife can’t leave out of fear. These performances are then backed by beautiful cinematography where the ocean plays a big role. The cherry on top is the immersive music that flows through the entire series. It’s spot-on and I can’t wait to get my hands on the soundtrack.

In my opinion the trailer doesn’t do the series much justice, so don’t use it as a reference to decide whether or not it’s something for you. Watch the pilot, then decide. You might want to cancel the rest of your plans this weekend though.. definitely binge-worthy.