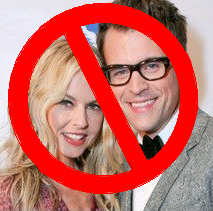 Yesterday, the news came that Rachel Zoe is splitting up with her assistant and “The Rachel Zoe Project” co-star Brad Goreski. “I love Rachel and she’s taught me everything I know. But there’s a point where either I do it now or I’ll never know what it’s like to spread my wings and soar.” Brad told People magazine. And it was amicable! Rachel says of the 33-year old’s departure, “We couldn’t stop hugging and we couldn’t stop crying,” she says. “He did this with such class and elegance. And I get it. I just told him, ‘I’m here for you always.”
However, today sources revealed that the split wasn’t amicable at all! “Brad was sick of doing all the work while Rachel got all the credit,” according to a fashion insider. “While Rachel feels used by Brad. She feels as if she taught him everything and the second he got a chance to leave her high and dry he did.”
If you watched the last episode of “The Rachel Zoe Project”, you might’ve already guessed this was coming, but the rumors really hit the roof during New York fashion week where Brad seemed to be welcomed more than Rachel.
“Fashion week was definitely the turning point,” according to a friend of Rachel’s. “Brad was sitting on the front row of every show and getting invited to as may events as his boss. However the final straw was when Brad appeared on the cover of The New York Times style section. Rachel hit the roof and reminded him he was her assistant and it was called ‘The Rachel Zoe’ show not the Brad Goreski show. That was the moment that the two of them were over.”
Sources also state that Brad has already been approached by several production companies about starring in his own fashion reality show. No news yet on whether or not the celebrities that Brad styled during his stay at the Zoe camp, will follow him or stick with her.